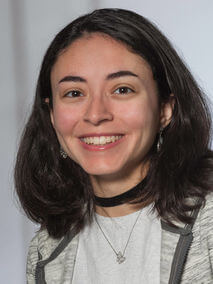 Fadwa El Tahry Abdalla was born in April 1992 in Giza, Egypt. She finished her Bachelor degree 2014 in Pharmacy and Biotechnology at the German University in Cairo (GUC), Egypt.  After that she started to work as a teaching assistant in the biochemistry department at the GUC untill the end of 2016. She started her Master’s thesis entitled “Contribution of Cx37 C1019T and Cx40 A71G polymorphisms in the predisposition of Acute Myocardial Infarction in the Egyptians” in 2014 and defended her thesis in April 2016. In October 2016 she joined HBIGS graduate school in order to proceeded with her PhD project “Role of S100A1 in cardiomyocytes metabolism” February 2017, in the Molecular and Translational Cardiology department of internal Medicine III, University Hospital Heidelberg.