Social neuroendocrinology: Neurobiology and biopsychology of social relationships and health 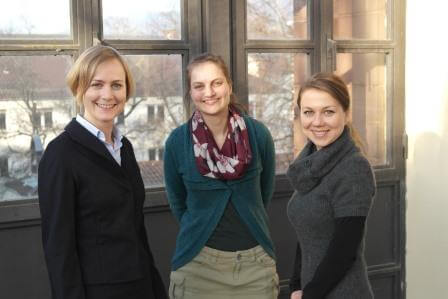 Our research group focuses on the influence of social relationships on mental and physical health, with an emphasis on the neurosciences and neuroendocrinological methods. We are interested in, how hormones (e.g. oxytocin, sex hormones) can influence social behavior, such as couple interaction and - on the other hand - how social behavior influences biological parameters (e.g. endogenous hormone levels, corticosteroids, neurophysiology) and subjective experiences.

These interests guide our research with healthy study participants and clinical groups.

In cooperation with the Department of Clinical Psychology (Head: Peter Kirsch, Ph.D.) of the Central Institute of Mental Health in Mannheim (ZI Mannheim), we investigate the neurophysiological reactions of both partners during instructed standardized emotional dyadic interaction. Our focus is on the synchronization of physiological processes and the influence of relationship characteristics.

(Mechanisms and interventions in Major Depression)

Affective disorders - in particular major depression – are among the most prevalent mental disorders which accounts for their relevance to the public health system. This project focuses on perceptual processes during social interaction in depression covering the field of clinical diagnostics, therapy and evaluation research. In particular chronic depression reduces the ability for empathy and compassion, cognitive perspective taking and increases self-focusing. Neurobiological findings indicate changes in endocrine, physiological and immunological parameters of the stress response, as well as reduced activation of reward-related CNS mechanisms during the processing of social stimuli.
Combining established and new methodological approaches a clinical sample with depressive patients and their significant partners will be compared with healthy control couples during a standardized positive social interaction task (cross-sectional design) as well as before and after an intervention in the depressed couples (longitudinal design).

Thus our approach is twofold:
Firstly, we will evaluate the correlation of attention-related processes (measured by real-time documentation of eye movements i.e. eye-tracking) between depressive patients and their significant partner and healthy control couples during a standardized positive interaction task in the laboratory setting. This control group design allows for comparisons of possible deficits with regard to interaction and communication skills between the clinical sample and healthy couples. The social interaction will be additionally characterized by stress biometrics with the aim to identify potential biopsychophysiological mediators (case-control study).

Secondly, we will analyze the effect on couples’ positive interaction behavior and stress biometrics as well as effectiveness of a 10-week compassion training program (Cognitively Based Compassion-Training / CBC-Training, a program of Emory University, Atlanta, GA, USA) on biopsychophysiological mediators  such as endocrine, immune and peripherphysiological parameters using a randomized-controlled trial design. These include eye-tracking, heart rate, cortisol and video based interaction analysis as well as self and external assessments.
The CBC-Training will be complemented by couple, systemic, cognitive-behavioral and interpersonal therapeutic approaches. The effectiveness of the training will be evaluated via the individual changes in stress biometrics and in comparison to the control group (TAU).
The aim is to authenticate the effectiveness of a compassion based group intervention for couples.
It will be tested if an additional group intervention might have further benefits in the treatment of depression due to positive effects on social interaction skills.