The PEF-Immun study, which is funded by the Innovation Committee of the Federal Joint Committee, aims to support patients with already metastatic malignant melanoma in the complex decision making process regarding further treatment options. Recently, so-called immunocheckpoint blockers have been applied in the treatment of some tumor diseases. Their use has significantly increased the mean survival time of oncological patients. The substances approved for this purpose vary considerably in terms of their response rates, efficacy and tolerability. The risk of severe autoimmune side effects is rather underestimated by patients. However, these can be considerable: The reaction of the immune system can get out of control and it can attack the body's own tissues or organs and cause considerable damage. Patients and their caregivers are thus confronted with a highly preference-sensitive, serious decision. For patients it is necessary to weigh up whether such a therapy should be carried out and if so, at what intensity. For this reason, the project will develop a web-based, interactive medical decision aid (Patient Decision Aid - PtDA) according to internationally recognized quality standards (IPDAS) for immunotherapy, implement it at the two National Centers for Tumor Diseases (NCT) in Heidelberg and Dresden and test it on a sample of 132 patients with malignant melanoma in a prospective randomized controlled trial against treatment-as-usual. Patients will be able to use the PtDA in advance of and as a supplement to their medical consultation.

Patients are expected to feel better informed and more involved according to their own preferences, to have a more adequate risk perception, to be empowered to make the right decision together with the treating physician, and to be more satisfied with the decision made in the long term. In case of success, the PtDA for Immunotherapy could be introduced into the standard care throughout Germany. At a later stage, the PtDA will be specified for other oncological entities, translated into further languages and adapted culturally sensitive if necessary.

The project is under the consortium leadership of Prof. Christiane Bieber, MD, Clinic for General Internal Medicine and Psychosomatics, and is being carried out in cooperation with the National Center for Tumor Diseases (NCT) Heidelberg (PD Imad Maatouk, MD, Prof. Jessica Hassel, MD) and the University Cancer Center (UCC) Dresden (Prof. Friedegund Meier, MD). 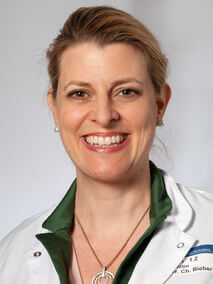