Research projects in our group focus on "Dynamic Events in HIV‑1 Replication".

We are interested in the biology of the human immunodeficiency virus (HIV‑1). With our work, we want to contribute to a detailed understanding of the intricate interactions of this important pathogen with its host cell during the viral replication cycle.

The interaction of a virus with its host cell is a highly dynamic process, involving ordered and regulated formation, transport, transformation and dissociation of (nucleo)protein complexes. Biochemical, electron microscopic and structural studies provide detailed images of HI virions and information about the composition of functionally important subviral complexes. However, these methods yield snapshots or ensemble data, which do not reflect the dynamics of individual events occurring in the infected cell. In contrast, modern fluorescence imaging techniques enable us to directly observe transport processes and protein interactions within living cells. Furthermore, super-resolution and correlative microscopy now bridge the gap between electron and light microscopy, allowing the visualization of subviral details via fluorescence microscopy. All these advanced imaging methods require attachment of fluorescent labels to the viral protein of interest.

Our aim is to analyze dynamic processes in HIV‑1 replication in a quantitative manner. For this, we develop fluorescently labeled HIV‑1 derivatives and fluorescent probes, which allow us to follow individual events in virus-cell interaction with high time resolution. These studies are combined with biochemical and virological analyses. In our current work, we particularly focus on the processes involved in the formation of the infectious HIV‑1 capsid by proteolytic maturation, and on the fate and role of this capsid structure upon entry of the virus into a new host cell. See also: Movie on our Research Work

HIV‑1 particles are released from the host cell as immature non-infectious virions. They only become infectious after undergoing a complex series of proteolytic maturation steps, in which the viral polyproteins Gag and GagPol are cleaved at multiple sites in an ordered sequence by the viral protease. This proteolytic processing is accompanied by dramatic rearrangements of the virus architecture. It is well established that the process of proteolytic and structural maturation needs to be tightly regulated to achieve formation of infectious virus. Precise characterization of this regulation is crucial for our understanding of HIV‑1 morphogenesis.

Despite intense research on this topic, a number of important questions are still unanswered. This includes very basic questions as:

Our aim is to develop a better understanding of the complex and dynamic events occurring during HIV‑1 particle assembly, polyprotein processing and structural maturation. For this, we develop novel fluorescence-based readout systems to monitor protease activation or activity, and combine biochemical and virological approaches with microscopic analyses.

Early post-entry events, from cytoplasmic entry of the viral core to integration of the viral genome into the host DNA, represent the most enigmatic steps in the HIV‑1 replication cycle. Fusion of the viral envelope with the cell membrane releases the capsid, which encases the ssRNA genome, into the cytoplasm. The viral RNA genome is converted into dsDNA by the viral reverse transcriptase and transported through the nuclear pore into the host nucleus, where it is covalently integrated into the host genome. Reverse transcription, nuclear import and integration occur within ill-characterised nucleoprotein complexes (functionally designated as reverse transcriptase complex and pre-integration complex). Uncoating of the HIV‑1 capsid is apparently functionally linked to reverse transcription and nuclear import. Therefore, events in the post-entry phase need to be very tightly controlled in time and space. Results from many labs indicate that the viral capsid plays a central role in regulating post-entry steps. An increasing number of capsid binding host cell proteins that either promote or restrict viral replication is also implicated in these events.

While these facts are well established, the sequence and intracellular localisation of molecular events, temporal and functional correlation between subsequent steps and the roles of viral and cellular proteins involved are a matter of intense debate. The study of post-entry events is complicated by the facts that (i) the subviral complexes undergo a series of dynamic transitions, (ii) events are not synchronized and a cell may contain many viral complexes in different stages, and (iii) not all entry events are productive and some – or many – lead into a dead end. Furthermore, alternative pathways appear to exist for distinct steps; these may differ between different cell types, may be used alternatively, or even occur in parallel.

Live-cell microscopy can help to overcome these obstacles, since it allows focusing on individual subviral complexes and can quantitatively describe a dynamic sequence of events with high time resolution. We are therefore developing and applying improved replication competent labeled HIV variants and novel, minimally invasive labelling strategies, in order to visualize individual events in the early stages of the HIV‑1 replication cycle using advanced microscopic methods.

Important questions we try to address in our work are: 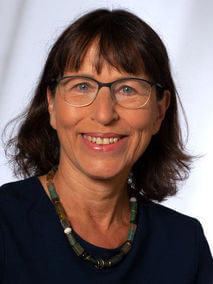 This group is located on the 3rd floor of the Center for Integrative Infectious Disease Research (CIID) at INF 344.