The overarching aim of the auditory cognition laboratory is to identify neural correlates of auditory perception and cognition by combining different functional imaging techniques (EEG, MEG and fMRI), studies in patients with cortical lesions after stroke, and most recently non-invasive brain stimulation techniques. The laboratory was started in 2008 as BMBF funded junior research group and has since continued its research with DFG funding. Collaborators include the experimental radiology section (Sabine Heiland) in the department of neuroradiology and the Section of Biomagnetism (André Rupp) in Heidelberg as well as international collaborators (Matti Hämäläinen, Harvard Medical School, USA;  Andrew Oxenham, University of Minneapolis, USA;  Lars Riecke, University of Maastricht, NL).

One of our core interests is the neural basis of scene analysis and auditory perceptual awareness. Based on stimuli where perception varies without changes of the physical stimuli, we explore neural activation patterns based on the participants’ indication of their current perception. This research has demonstrated a close co-variation between tone-pattern detection and activation of the auditory cortex (Gutschalk PLoS Biol 2008; Wiegand Neuroimage 2012). It has also been shown that the mismatch negativity (MMN) – which was previously considered a pre-attentional component of the evoked response – can only be evoked when participants are able to identify the regular pattern, which defines the mismatch, but not when the same sound sequence is presented while participants are unaware of the regular pattern (Dykstra Science Advances 2015).

Our current research explores how this activity in the auditory cortex is modulated and possibly controlled by (lateralized) frontal and temporal attention networks. In particular, lesions to the right parieto-temporal attention networks are often observed in patients with neglect, a neurological inattention syndrome observed for example in patients after ischemia in the territory of the right medial cerebral artery. Our results suggests that these patients show severe general deficits in the detection of rare auditory targets (Gutschalk Neuropsychologia 2012). Other recent projects are related to elementary auditory speech perception, short-term memory, subcortical auditory networks, and the comparison of fMRI and MEG activation patterns in human auditory cortex.

Future work will aim to disentangle the role of auditory and supramodal brain areas for perceptual awareness and auditory-based action sequences using no-response paradigms, pupil-dilation tracking, and non-invasive neurostimulation in normal participants and patients with neglect. 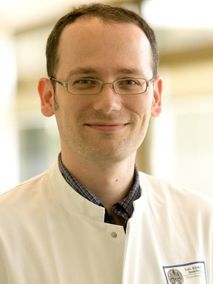